Retired U.S. Marine Gunnery Sergeant “Iron” Mike Reid doesn’t back down from a fight. After a phone call told him he was in danger of a stroke, Mike began fighting Type 2 Diabetes with the same no nonsense approach that won him the respect of his Marines.

You’ve been on a weight loss journey, dropping forty of one hundred pounds so far, are you making nutritional changes along with exercise or did you change your nutrition but keep your training program the same?

As of this writing I’ve actually lost 60 pounds.

Sixty pounds is even better! I was basing that on your Facebook posts. Well done!

I didn’t really do anything extreme. I stopped drinking sodas, except diet Dr. Pepper, and cut way back on sugary foods. Those small changes, along with training on a regular basis helped me get closer to my goal. 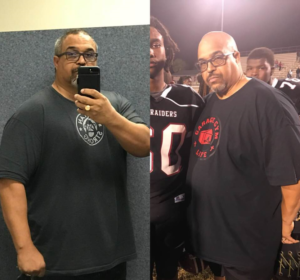 Speaking of training, I just got a copy of the 5th Set Protocol from Kindle Unlimited. How long have you been using it and how has it affected your strength gains? How do you think it compares to 10/20/Life and other programs you’ve followed?

I’ve been using the 5th Set Protocol for about 4 months now, and while it’s still too early to give a full review on the results, I will say that it’s a really well thought out and flexible program. There’s plenty of volume and heavy sets, but more than adequate recovery time, which is important since I’m a more “senior” lifter.
I like 10/20/Life too, but I was ready for a change. 5th Set isn’t better than 10/20/ it’s just different.

Flexibility is a big deal! Even those with sponsorships have other commitments must be respected. Those commitments not only eat into training time but also affect recovery. Picture having to travel for work the day before you’re scheduled to deadlift heavy for example. Long hours in the car or on a plane and heavy lifting don’t mesh too well. So a flexible program is important.

You said on Instagram, “I’m not training for a 5k, I’m not preparing for a competition, I’m not trying to set a new record. I’m not trying to impress you. I’m saving my life.” That’s pretty powerful and I think it reflects the time in 2015 when you were hospitalized. Besides making the realization that you needed to become healthier, what did you learn about yourself from the experience?

I always have known that I am an emotional eater. What I didn’t know was that my moods swings were largely due to undiagnosed PTSD, as well as type 2 diabetes. I’ve been retired since 2001. So all of this time, while I felt something was off about me, I was actually suppressing my feelings about some of the things I went through while still in service. I learned and am still learning that I’m far more resilient than I ever gave myself credit for.

That resiliency might play a role in the answer to my next question. Despite the hospital stay, you didn’t make a commitment to change your life until last year. Why not?

I think that the Marine Corps mentality definitely played a role in me not making necessary changes in my life right away. PTSD is one of those things that has such a negative stigma, and diabetes is a disease that many people associate with obesity. THAT is a hard one to admit to…being obese. All of these things played a part in my hesitation to get “fixed”.

What was the final motivator?

I began really training again in 2015. Doing what I’ve done for so long; focusing on lifting heavy stuff. I did a couple of meets with decent results. But, when I was diagnosed with type 2 diabetes I finally had to admit to myself that I needed to make some lifestyle changes or risk standing at the “pearly gates” long before I was ready to.

Do you still need your CPAP machine? How did using one help with sleep and recovery?

I do still use my CPAP machine and it’s amazing. When I was told that I was suffering from sleep apnea, so many things fell in place. I wasn’t old. I wasn’t lazy or unmotivated.
I was dangerously sleep deprived. Now, I sleep the night through and wake up feeling well rested instead of exhausted. I know that being able to get a full night sleep has helped tremendously with my weight loss and any strength gains I’ve experienced.

When I was deciding how much weight I needed to lose, or what my walking around weight needed to be, I used the weight I was right before I deployed to Iraq, I was at my strongest and most athletic then. How did you select your goal weight?

Before we continue with how you chose a goal weight, I want to unpack that statement. You said that being diagnosed with Type II Diabetes was the wake up call that you needed a lifestyle change. Was losing weight not part of that or did you know you needed a change but didn’t connect that change to weighing less?

I knew I needed to lose weight, but I was in such a bad place mentally and emotionally that I just didn’t care. But, when a doctor called me at midnite after seeing my blood sugar was stroke level, well that convinced me to do something or die.

Back to what you were saying about your goal weight.

I was strongest when I was 201 pounds with a body fat percentage of about 12%. But that was years ago. At the time, I was around 345-360 depending on what time of day it was. I just thought, “You know, it would be nice to be around 250 again”, and just went from there.

You’ve been a home gym owner for about a year now as we’re doing this. How different is it to train in your shed compared to where you trained 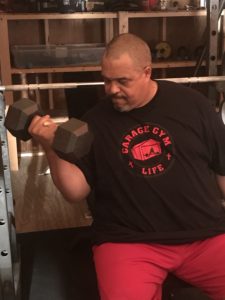 I absolutely love training at home. My shed is my sanctuary. The biggest difference in training in my shed is that there are no distractions outside of the ones I create.  I no longer have to deal with the crowds and can really focus on simply training. I’m a talker by nature, so I don’t blame others for one of my quirks. But, at home, alone in my own space, that distraction is eliminated.

I think most people live way too much in yesterday and tomorrow and fail to live in today. However, living for right now requires much more focus. On of the things I had to focus on was my inclination to treat eating as a social event. As a pastor, eating with others is a great way to help people open up. There is something about mealtime that almost automatically sets most people at ease. The longer the meal, the more open people become. So, I was using counseling as an excuse to overeat. Now I focus on portion size and just making better food choices.

As I told you on Instagram, I love seeing both you and your wife training in the shed. You said that she’s a cardio queen whereas you’re known for not being a fan of running. I see a stair stepper, a treadmill and what looks like a rower in your gym, which is your primary cardio option?

Let me say that since retiring, I HATE cardio! If you see me running it’s because something big is chasing me. We do have an elliptical/stair stepper and a treadmill but I use neither.

I ask that because I’ve got one bad knee as a parting gift from our beloved Corps and that manifests itself in any runs lasting longer than about ten minutes which makes conditioning a challenge. I settled on the heavy bag and crawls as my primary. What cardio options did you try before settling in on your “favorite”?

For cardio I opt for farmers carries around my yard, sledgehammering tires, and hitting a heavy bag I have in the yard. I haven’t done much cardio this winter so I’m really glad that it’s warming up. 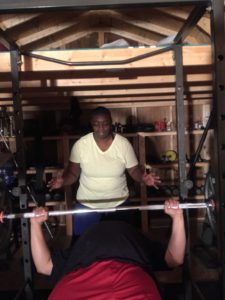 One of the toughest things about shedding pounds happens on Sundays after church when believers get together to share a meal. That’s in keeping with the communal tradition of the Christian faith but it’s also been a slippery slope that makes it okay to overindulge.

Being a pastor and being overweight poses a big problem. It’s difficult to preach about living right when you’re guilty of food gluttony.

Yes! Don’t make me stop the interview to have church with you! I’ve often said that gluttony is the acceptable sin in our faith. And that’s sad.

Here in the South, it is almost expected that pastors are to be overweight. But, I became so convicted that I had to just stop being a human vacuum or stop preaching. Only one real option there.

How do you as a pastor counsel your flock on a proper attitude towards food?

I’ve been very open and honest with the congregation about my struggle with my weight. They’ve been great encouragers though and often lift my spirit by telling me that my weight loss is now noticeable.

You issued an open invitation for training partners at your home gym. Besides your wife, have you gotten any takers or is everyone scared of you?

I’ve asked several times via social media for someone to train with. I’ve had a couple of guys come and train. While I wouldn’t say that they are afraid to train with me, I don’t think that they were ready for the intensity of the workouts and they were really surprised at how heavy I train. And these were guys with lifting experience! Lol! I have started training with a young guy who is just starting out. I typically don’t like training with someone just starting, but his enthusiasm more than makes up for his inexperience.

In October 2017 you mentioned on Instagram that your next meet goal is 1600 total and meet prs in all 3 lifts. Are you still going after that or is it on hold until after the weight loss journey?

As for competing, I’ve kind of put that on the shelf for the time being. I’m really enjoying the whole “power building” thing. There’s absolutely no reason why a person cannot train heavy for power yet still have a, somewhat, aesthetic physique. I’m not trying to be shredded, but it would be nice to be the seasoned guy that looks like he lifts. 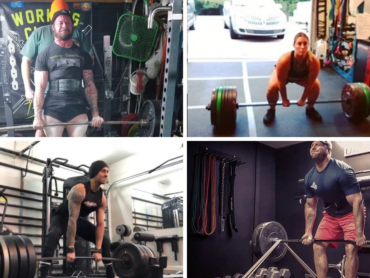 In May of 2018 I partnered with some of the biggest names in the Garage Gym Community to host a virtual... 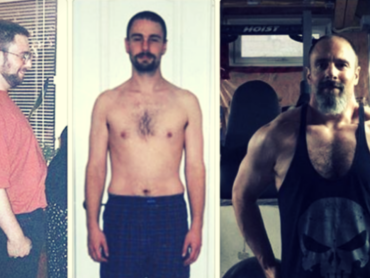 Recovery. Recovery can mean so many things. For gym rats, it’s what we do after a workout. A time when the... 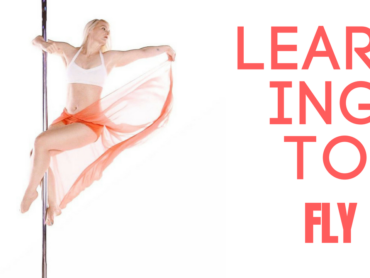 Brandis Atwood discovered pole fitness while browsing Pinterest and what she calls her obsession with the... 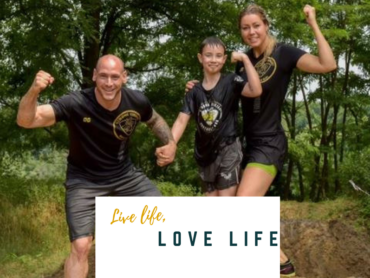 You have a Muay Thai background, Muay Thai is really big in the Netherlands, I still remember watching Peter... 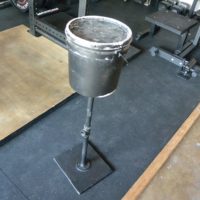